The programme looked at the charity work of the four princes Philip, Charles, William and Harry. Daisy was interviewed after being awarded her Duke of Edinburgh Gold and was a wonderfully articulate and passionate ambassador for the benefits of the D of E scheme which has just celebrated its 60th anniversary.

Daisy is one of the more than 120 girls each year who take a D of E Award at NHEHS. The three Award levels with their wide range possibilities for volunteering, adventure and challenge make it hugely popular here, with girls gaining new skills and pushing personal boundaries. With bronze and silver successfully under her belt, Daisy completed the Gold award while in Year 13 at NHEHS, before heading off to South America on a GDST travel scholarship to improve her Spanish and work on a range of community projects (pictured). Since then she’s been studying Mandarin at Durham. 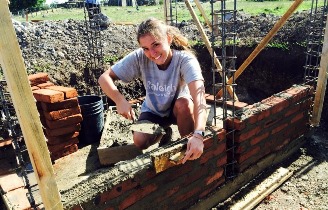