Did you know that our Head of Sixth Form, Ms Bushell, ran both the Boston and London marathons over the past month? We went to speak to her about her motivation and to find out how she managed to fit all that training in!

What inspired you to run both the Boston and London marathons (within two weeks of each other!) this year?

I have wanted to run the Boston Marathon for a long time – it’s an iconic race as it’s one of the oldest in the world, and it’s also the one where Kathrine Switzer and Bobbi Gibb famously became the first women to run a marathon.  This was at a time when it wasn’t considered appropriate for women to run any distance greater than 800m, and so without them, modern women (including me!) might not be able to do so.  Boston also has the fastest qualifying times in the world, so I was really proud just to have qualified.  (For some context, my first marathon in London in 2015, I ran 4:51.  To qualify for Boston I had to beat 3:35, and actually ran 3:17, so I’m still a bit in shock about the improvement I’ve made!)

I didn’t actually originally intend to run London!  I had a place because I had run what’s called a ‘Good for Age’ time last year.  Boston didn’t go quite to plan (the weather conditions were tough, and I ran more than twenty minutes outside my PB), and so I thought I’d have a go at using my fitness from Boston training to see if I could do any better in London.  If I’m honest, I also had a bit of FOMO seeing lots of friends preparing for London, and knowing from my last time (2015) how amazing the atmosphere is!

Did you run for any charity? 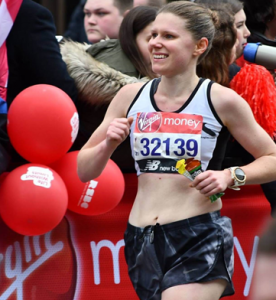 Not this time.  When I run for charity I always choose Mind, which is a cause very important to me.  I also feel though that I run too many races to be continually asking people to sponsor me!

What aspect of your training did you find toughest?

I had a much more challenging programme this time around than I’ve ever had for a race before, including some very long sessions.  Some of these fall on Friday nights, and the hardest thing was probably getting myself out of the door after work on a Friday to do 13-15 miles of speed training when I really just wanted to collapse on the sofa!

How did you combine training with your responsibilities as Head of Sixth Form here at NHEHS?

This is another tough aspect of training, but it’s one that I relish – finding that I’m capable of fitting in a busy training schedule around a demanding job!  I am pretty organised, and I use every moment of the day; I generally train in the school gym at 6am at least once per week, or I might manage to fit in a run around an evening event, or head straight to the track at Perivale after work.  I also find that my training really energises me for my day in school, and I use time on runs to think about upcoming events or tricky problems I’m trying to unravel.

Were the Sixth Formers supportive?

Absolutely!  They sometimes express astonishment at the early hour I arrive at the Sixth Form Centre and start sending them emails, but they are always around to wish me luck and say congratulations if they know I’ve got a big event coming up. 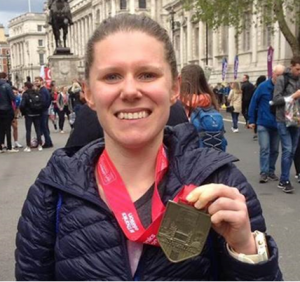 With Year 13s about to go on study leave, can you offer them words of advice from your race preparations as they prepare to sit their A levels?

I could talk about running analogies all day!  I would say that they should trust their training.  When you plan to run a race, you set out to run the distance much, much faster than you have ever done it before.  With a marathon, you don’t even run the full 26.2 miles in training; the first time you do it is on the day.  You have to trust your training, and believe that you will be able to achieve the goal – and generally it works!  Revision is like this – you might not feel ready, but you have to trust your preparation, and it all comes together in the exam room.

Haha!  I’m planning to be a little more relaxed next year and just do one marathon in the Spring.  It’s very likely to be London, and I’m hoping that I will be able to gain what’s called a Championship place – if I can run a 3:15 marathon or a 1:30 half marathon this autumn then I’ll achieve that.

Finally, congratulations on your selection as an Everyone Active Sporting Champion!

Thank you! This gives me free access to all Everyone Active training facilities nationwide, and also the possibility of mentoring opportunities with athletes such as Colin Jackson.