U10 Netballers at Bute House Tournament

U10 Netballers at Bute House Tournament

The U10 A netball team travelled to Hammersmith to take part in the Bute House U10 Netball Tournament in February.

The tournament comprised of twelve teams, divided into three sections. NHEHS were placed in a strong section with Kensington Prep, Pembridge Hall and Putney High School. Each match was only six minutes each way meaning teams had to keep possession, while the shooters had to be as accurate as possible.

Our NHEHS team had a tough match first up against Putney, where they made too many errors but played more settled netball in the two following games to narrowly lose both by one goal.

With all first round matches completed, there was a short break before the next round of games. With three more matches to play 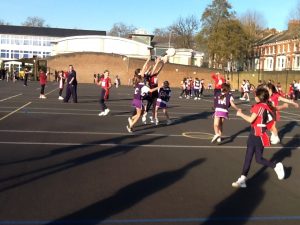 against Newland House, Glendower and North London Collegiate, NHEHS were determined to continue to build on their improving game play. It was a close game against Newland House which NHEHS narrowly lost by one goal but went on to draw their final two matches. Overall it was a great tournament and lovely to see how all the girls improved during the course of the afternoon.