Tuesday 19th March saw the U12 Netball Team, a squad of 10, travel to Highgate school for the Middlesex County Tournament. The girls wanted to perform well in this tournament 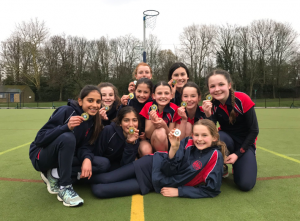 and had it as one of their goals for the season – so spirits were high with a mix of excitement and nerves!

The first game saw the team play Francis Holland Sloane Square, who we knew from past fixtures in the season were a strong team. Despite leading at half time, NHEHS came out with the draw at 4-4. Not the start the girls were hoping for, but definitely some positives to take away.

The team came out firing for the second match, beating Henrietta Barnett School 7-0 and all ten players took to the court during the match.

The third game was against local rivals Godolphin and Latymer – we knew this would be a tight match based on the draw we had had against them in our fixture earlier this season. The girls trailed 2-1 at half time and some inconsistency in attack saw the team take the loss 2-5.

The girls were disappointed and a strong team talk was had. This brought the team a new level of confidence and determination, which was shown in the results in the remaining  pool matches. The girls went on to beat North London Collegiate School 8-0, Highgate School 9-3, Fortismere 8-1 and Channing 4-2. With only one loss in the pool the team had finished in second place and were through to the Semi-Finals where they would face St Paul’s Girls School, who were winners of their pool.

The determination to win, and self-belief within the team was evident from the first whistle of the Semi-Final, where the team turned over the first centre pass to score. Outstanding play by every girl on court saw NHEHS take the lead at half time 6-0! In the second half St Paul’s came out stronger, but NHEHS held their lead with some excellent shooting under pressure to seal the win 8-4.

It was then the final – everything the girls had worked so hard for during the season was coming down to this one match- could they be County Champions?

The final saw NHEHS against Lady Eleanor Holles (LEH). Again the team came out strong, leading 2-0 for the early part of the game. The team made numerous interceptions from an excellent defensive effort, but LEH came back to level the scores at 2-2. However, the team weren’t going to give up without a fight and all their training came into play when their movement and trust in each other saw them take the lead 5-3. The final whistle went – and the girls couldn’t believe it- they had made their goal! U12 Middlesex County Champions 2019!

A special mention should be had for Centre Addy who had a truly phenomenal tournament. Many bystanders and opposition commented that she was player of the day. Although it was truly a full team effort to get the result the team did, Addy’s composure, work rate and vision to get interceptions really helped the team reach their goal, so well done to her!