On this the centenary of the 1918 Representation of the People Act we have had a quick look at our archives to capture details on some the remarkable women from NHEHS associated with the fight for women’s suffrage.

Aeta Adelaide Lamb (NHEHS 1898 to 1899): one of the longest serving organisers in the Women’s Social and Political Union (WSPU), a militant organisation campaigning for Women’s suffrage.  Responsible for writing some of Christabel Pankhurst’s speeches.  Arrested and served  terms in Holloway Prison.

Ernestine Evans Bell (NHEHS 1885. Left because of ill health):  met Sylvia Pankhurst when she was studying at the Royal College of Art and joined the WSPU 1907.   She used her art for the suffrage movement, designing badges in the suffragette colours.

Gertrude Lowy (NHEHS 1898-1904): one of four Lowy sisters – Gertrude, Lina, Ethel, and Ruth – to attend NHEHS. Their mother, Henrietta, was a ‘tax-refuser’ and early WSPU member who was jailed for stone throwing in 1910. Her daughters also became members of the WSPU.  Gertrude was arrested for militancy and window smashing in Knightsbridge in March 1912 and was sentenced to 2 months hard labour.   While in prison, she went on hunger strike for which she was awarded a WSPU hunger strike medal (pictured). 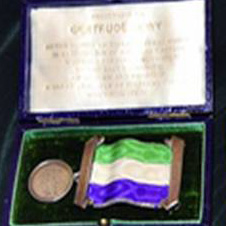 Barbara Ayrton Gould (NHEHS 1897 – 1898): joined the WSPU in 1906. In 1908 she gave up her post-graduate research in order to work full-time as an organizer for the WSPU but she left after 1913 because she was disillusioned with the militant tactics of the organisation.  On 6th February, 1914, she became one of the founding members of the United Suffragists – a group which kept moderate pressure on the government, even during the war years. Barbara eventuallly went on to become Labour MP for Hendon North in 1945. 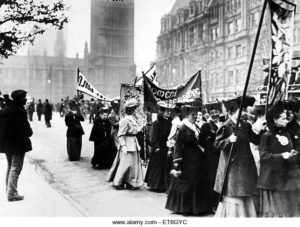 Helena Swanwick neeSickert (NHHS 1878 – 1882): in 1906 she joined the National Union of Women’s Suffrage Societies rather than the WSPU as she did not agree with the violence used by the WSPU. She became editor of the NUWSS’ weekly journal and remained on the Executive until 1915.

Margaret Haig Mackworth, 2nd Viscountess Rhondda (nee Thomas) (NHEHS 1897-1899):  joined the WSPU in 1908 and was secretary of the Newport branch. She was involved in protest marches with the Pankhursts, jumped onto the running board of Prime Minister Asquith’s car in St Andrews and attempted to destroy a post-box with a chemical bomb. As a result she served a time in prison but was released after going on a hunger strike.

And then there were the staff.   Hertha Ayrton, a maths teacher here at Notting Hill in the 1880s who joined the WSPU in 1906 and at one time was vice president of the National Union of Women’s Suffrages Societies.  She was also the first woman to be elected to membership of the IET (Institution of Engineering and Technology) and the only woman to win the Royal Society’s Hughes Medal.  Winifred Holtby was a history teacher here in the mid 1920’s and a friend of Vera Brittain. Both were ardent feminists, socialists and pacifists.  When women finally achieved the right to vote on equal terms with men in 1928, it was Winifred who produced A New Voter’s Guide to Party Programmes  to help new women voters engage with the political process.

These are just the women we currently know about.  We suspect there were many more who involved themselves  throughout the Edwardian era and right up until the passing of the Equal Franchise Act in 1928.   We are very proud of them all.