Weekly Sports Round Up – 15th February

Weekly Sports Round Up – 15th February

A busy week before half term saw our teams taking part in matches in badminton, football, hockey, netball, trampolining and water polo.

Our U12, U15 & U15 A teams participated in a friendly round-robin tournament at Ellen Wilkinson School. NHEHS won the final on Court 1, with Ellen Wilkinson taking the honours on Court 2 & Court 3. Well done to all – especially those playing in their first ever badminton match. There was more badminton the following day at St. Augustine’s with a friendly match played in the format of ‘Queen of the Court’ with the aim of pairs trying to win a series of timed matches to progress court by court to one end of the sports hall to obtain the top spot. All matches were played in good spirit and with a mixture of age groups. Hana and Alice were the worthy joint winners for NHEHS with one of the Year 10 pairs from St Augustine’s.

The NHEHS first XI kicked off their ISFA Cup with a 7-0 first round home win vs. University College School (UCS). 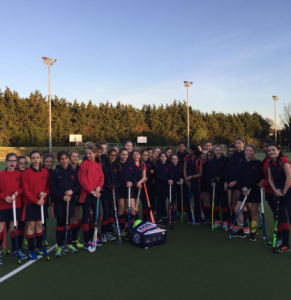 A mixture of internal and external fixtures kept our hockey teams on their toes this week: our U12A lost narrowly 3-5 to Godolpin & Latymer (Most Valuable Player (MVP) was Amelia) while the U12C team played NHEHS U11A & won 3-1 in a competitive game.

Thirty eight girls from our four U12 & U13 hockey squads rounded off the week on Thursday with internal matches and training at Indian Gymkhana- great to see such high standards of play and to have so many playing. 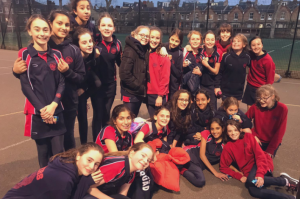 Eleven NHEHS teams played matches this week, with our U12 ABC teams taking on Godolphin & Latymer away. Our A team drew (MVP Ella) with the B&C teams losing (MVP Eliza & Tara respectively). The U13 A&B played very close matches at St. Augustine’s with the A team losing narrowly (MVP Genevieve) & the B team winning by one goal (MVP Eleanor). Our U13 C&D teams played West London Free School, with a defeat for the As (MVP Anna) & a win for the Bs (MVP Ella). Lady Eleanor Holles were the opponents for our U14 ABC teams on Thursday with a victory for the As (MVP Sofia) & Cs with a defeat for the B teams.

Our U14 trampolinists took on Ellen Wilkinson School in a friendly fixture at home. Although Ellen Wilkinson were the overall winners, Amy took the top performance of the competition.

The NHEHS U15 water polo team put on a fantastic performance at Alleyn’s School against very tough competition in the qualifiers for the ESSA water polo finals which will be held in March. The team went through as one of the two qualifying teams, having won 6-4 against Old Palace but losing to Alleyn’s. The most valuable player was Mia.