Weekly Sports Round Up – 8th March

Weekly Sports Round Up – 8th March

Our sporting week took us to Bromley, Shropshire, Manchester and West London with fixtures and tournaments for cross country, football, gymnastics, hockey and netball.

A netball-tastic week included the GDST Condover Hall Tournament in Shropshire for our U13BCD and U11AB teams, our Senior netball team competing at the GDST rally at Bromley and the National Plate semi-final in Manchester for our U15A team. We also managed to fit in 13 regular fixtures for our U12, U13, U14, U15 teams! 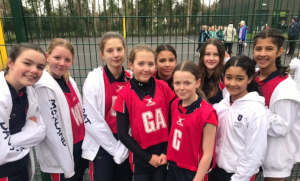 The U13 Bs were entered into the U13 A pool over the weekend. The girls had a very competitive pool and tried extremely hard over the whole weekend. They won one of their matches convincing with a 5 goal difference, however met very strong teams in their other matches. Ansley V and Lydia M were awarded Players of the Day over the weekend.

Our U13B team faced 8 games in total to play in the group stages against Streatham, Royal, Newcastle, Sheffield, Shrewsbury, Northampton, Belvedere and Croydon. With some great team performances, we finished third in our group! Anna W was Player of Saturday and Cordelia L Player of the Tournament for our U13B team.

We were really proud of the girls, with their improvement throughout the weekend and their super results. Congratulations to captain Maddy H who was Star Player for Day 1 and to Louise for getting Star Player on Day 2.

On March 4th, our U15A netball team travelled to Manchester for the Independent Schools National Netball Cup Plate Semi-Final. In a tight game played at the National Cycling Centre, St Bede’s College took the win 46-33. Congratulations to our U15s for progressing so far in the competition! 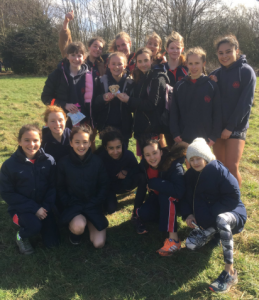 We took teams from U12 up to Seniors (Year 10+) to the GDST Rally hosted by Bromley High School on March 7th. Our Senior Cross Country team for Year 10 and above (pictured)  finished second overall out of all the GDST schools with our U12 runners achieving sixth place in their Year 7 race. On one the windiest days ever (!) our Senior Netball team played a grand total of 9 games at the Rally, winning 5 out of the 9. MVP was Emily P.

Our U13 & U16 gymnasts also competed against the other GDST schools.

NHEHS took two U13 teams to the Middlesex Country Hockey tournament on March 5th . The B team unfortunately did not win any of their matches but were playing mainly against very strong A teams. NHEHS was only one of two schools competing with an A & B team in the competition. Congratulations to the U13B playing bravely against tough opposition and gaining valuable experience while playing more competitive matches. The U13A team played Godolphin & Latymer, St Benedict’s, West London and Highgate in their group, drawing the first two matches, winning the third and losing their final match. Unfortunately despite some good performances, we finished third in our group – not quite enough to gain a semi-final place. Aside from the Middlesex Tournament, our hockey first XI managed a narrow 2-1 win against Highgate School and our U14A a 4-1 victory against The Harrodian School.