On the 13th of June five girls from Year 4 went to Brunel University for the GDST Techathon 2019. We took part in range of activities with other GDST Schools including chocolate welding, a dome experience, a talk about rockets, Scratch coding, taste testing and controlling a robot called Sphero.

The first workshop we went to was chocolate welding. In this workshop, we had to weld four bars of Dairy Milk Chocolate to make our own chocolate bridge. First, we 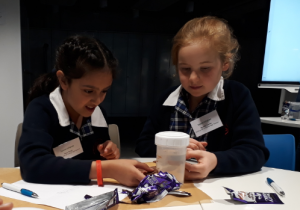 discussed what types of bridges would be sturdy. After that, we designed our bridge with a pen and paper. Next, they gave us a container with really hot water (hot enough to melt chocolate when pressed onto the outside). Our bridge had three pillars and a whole bar on the top and bottom. Then, they tested our bridge on the Box Valley by placing weights on it.

WE WON! They stacked 2 kilograms onto our bridge before it collapsed!

After the chocolate welding session, we went to do some Scratch coding. The theme for the day was space so we had to make a conversation in space on Scratch. Romilly worked with a girl from Putney High School who was also called Romilly, and together they made two astronauts have a conversation and then coded the characters to move between planet backgrounds. 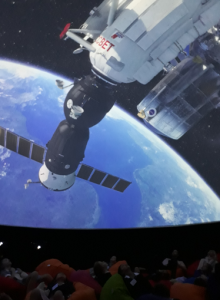 Our next activity was an Immersive Dome. Each of us lay on a bean bag and looked up. It was amazing!  We were literally watching a 3D movie! Tim Peake was the narrator and showed/told us about the international Space Station. He told us what happened in each module. He also spoke to us about the size and how it is the same as a football field. Our time in the dome was around 15-20 minutes but only felt like 5 minutes. We all want an experience like this again!

In the next workshop we listened to a scientist called Doctor Julie Keeble. She takes children’s ideas for experiments and then sends them up to the International Space Station. In the workshop she explained a bit about herself and our challenge, which was to build our very own rocket with other girls from other schools. We could use paper, newspaper, masking tape and scissors. Doctor Julie made a place from which if your rocket passed over the table then the rocket would fly into orbit. We all designed creative rockets and tested them. None passed over, but on Doctor Julie’s second attempt ours just went into orbit.

Next, it was our turn with the Spheros. Robotic balls that you drive around with an app on your tablet. At the beginning of the lesson the instructors read out a few facts and in 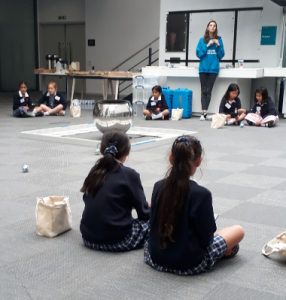 pairs we had to drive our Sphero to the instructor that we thought owned the fact. Then we played a game called Zombie. Kyra and I volunteered to be the Zombie and we had to tag other Spheros with our Sphero. 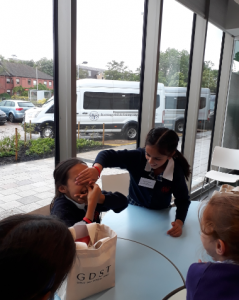 In our final session with Dr Julie Keeble we learnt that in space the astronauts’ noses get all blocked up and they can’t taste properly. We then had to squeeze our nose and shut our eyes while another person put a skittle in our mouth, then we had to guess what colour the skittle was. We did this to see what it was like to eat in space. Then we opened our eyes and releases our nose to see if it tasted the same.

We had a wonderful time and we hope the girls next year will enjoy it as much as we did.