This summer two teams of intrepid NHEHS Year 12 girls sweated the heat, mingled with the mozzies, immersed themselves in Thai and Cambodian culture and taught English to local children as part of their 24-day World Challenge.

Each team of 14 girls, two teachers and one World Challenge leader faced some of the most intensive days of their lives. The months leading up to the departure had been busy too as we all had to finance the trip by ourselves through an amazing range of fundraising efforts including a 16-hour rowing challenge, babysitting and kids party entertaining!

Learning to budget (and knowing their 17 times table!) became an important daily challenge on the trip as we took turns to take responsibility to manage a daily budget for the whole group, including negotiating on transport, accommodation, activities and food costs. 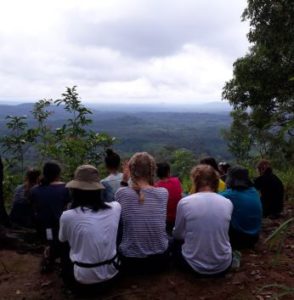 Following several days acclimatising and sightseeing in Bangkok, the teams travelled to Kanchanaburi to tackle a strenuous trek to Hellfire Pass, rewarding themselves by cooling off in the beautiful Erawan Falls.

After taking in Angkor Wat, we discovered our calling as manual labourers clearing space to build a 70 m fence for a local school as part of voluntary work at a small village in the jungle.  Having completed our assigned task, one of the teams went further and took the initiative to start up a vegetable patch for the school too. 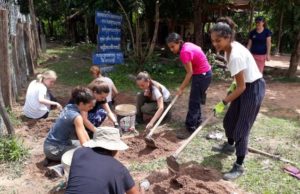 The afternoons were spent with a small group of local children (aged 6-15) teaching English, using shapes, parts of the body and the old favourite “Heads, Shoulders, Knees and Toes!” We enjoyed the challenge of coming up with ideas to entertain and teach the children with limited resources, so that despite the language barriers, the number of students had grown to over 20 by the end of the stay!

Leaving the jungle, we continued on to Phnom Penh in Cambodia where we learned about the Khmer Rouge and the Killing Fields at the thought-providing Genocide Museum.

The Challenge ended with not one but two splash-out, memorable meals, the reward of careful budgeting which clearly worked as unlike some other groups we were able to use our left over money in style!

The teams left Cambodia with a huge sense of achievement, especially in completing the jungle trek as a group.  As teenagers who like our own space normally, we had learned to live alongside the same people for a long time in a strange environment while getting to know girls we did not know before. And all without our mobile phones! We soon realised the importance of time management and learned how to make decisions in a large group. We came back more aware of what we CAN do and more open to trying to achieve new things that we might not have done before. But the best thing was definitely the group bonding and new friendships we made. 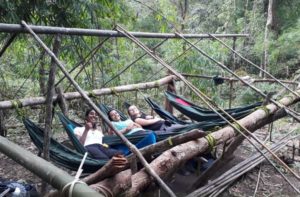 Some of our highlights:

Most eventful night – when the rain started to fall through the canopy on to us as we slept in our hammocks in the jungle!

Funniest moment 1 – the very bit-ey fish at the waterfalls!