On 14th November 2018, the Year 6 Team Captains, Vice Captains & two members of School Council travelled to Parliament to learn what it was like to be a Member of Parliament and the rules and regulations they need to abide by. We were all eager to arrive and extra ecstatic to discover that the last time the Captains and Councillors went on a special trip together was over 7 years ago!

with the help of some commuters! We arrived, then after going through a brief security check, we marched up to the Jubilee Room to listen to a lecture on ‘The Practice of Parliamentary Procedure in the House of Commons.’ The Jubilee Room itself was a true sensation. As our guide articulated her speech, we all gazed in awe at the intricate designs the room had to offer. It was such an honour to be there.

During the lecture we learned about the parliamentary ‘bible’ called the Erskine May which stated all the rules and regulations. If you were a clerk making a point in the House of Commons you would have to specifically link your comments back to this book. We were allowed to see and hold a copy of it afterwards. Finally, we learned about the Table and Journal Offices which write the legal documents, noting down what they think will happen in Parliament and what has happened already.

Following the lecture, we were lucky enough to pick up some free Parliament souvenirs (thank you, Mrs Ferguson) and walked downstairs. As we were running early, we asked Security if we could go further into Parliament. Luckily, we could, so we wandered towards the House of Commons. Crowds were beginning to pour into the hall, as today was no ordinary day for Parliament as it was the day Theresa May was trying to get her Cabinet ministers to support her Brexit plan.

We entered a hall with distinctive paintings and jaw-droppingly beautiful marble architecture. All of a sudden, police officers entered the room followed by the Speaker of the House of Commons for the ceremonial opening of Prime Minister’s Question Time! The crowds streamed after them but we were not able to follow them. However, we noticed that the BBC were filming ‘Parliament Live.’ Acting in an orderly fashion as we took in the atmosphere and looked at the walls and ceilings, we wandered into the back of the shot praying we would be on live television! Unfortunately, we had to leave a few minutes later, not that we wanted to, of course!

Overall, I found this whole experience so memorable and sensational. I was particularly pleased to see some of us in the background on the BBC Politics Live show on the BBC I Player later that evening! We owe a HUGE THANK YOU to Mrs Ferguson who is a legend for organising this whole amazing trip for us. 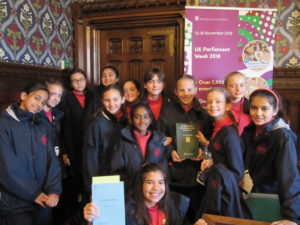