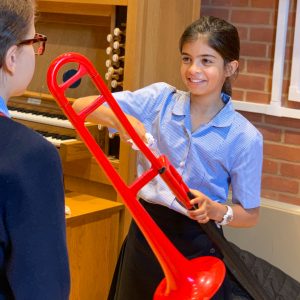 Did you know some orchestral instruments are slowly dying out in favour of the more popular ones, such as violin or flute? 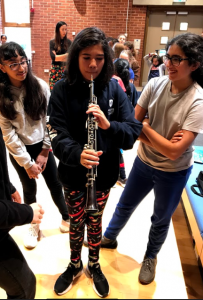 In September 2018, a new ‘Endangered Instruments’ initiative was introduced at NHEHS to help build a more balanced orchestra. Through this scheme, Year 7 are offered half a term free instrumental music lessons, half a term subsidised lessons in addition to a subsidised instrument loan for the year. The current offering is for a French horn, trumpet, trombone, oboe, bassoon and viola.

The Endangered Instruments scheme already proved successful last year – one bassoonist has now joined Session Orchestra and is taking her Grade 2 this term, one viola player (who was a violinist) took her Grade 5 viola last term and another viola player who was a violinist is now playing viola in Symphony Orchestra. The school has also benefited from generous donations of string and wind instruments from Old Girls.

Last week, it was the turn of Year 7’s budding musicians turn to try out the more unusual instruments in the orchestra, helped and taught by specialist 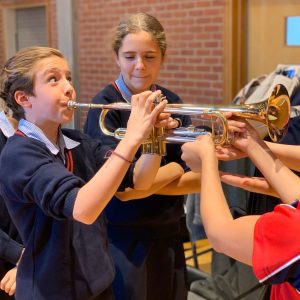 music teachers and their fellow students in the Recital Hall. 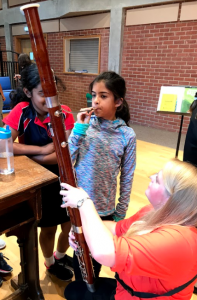 Starting with the French horn and trombone, the whole year were given the chance to try out the instruments to see what kind of sounds they could get from them as they listened to why Marianne (Year 7) loves playing a brass instrument.

Then Abigail, Natasha (Year 7) and Alice (Year 8) were asked why the viola was such a great instrument to play. 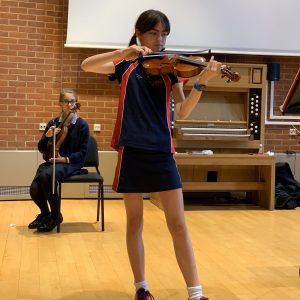 Abigail: “I didn’t want to play the violin because everyone plays the violin – that’s a bit boring – I wanted to play something different. I like the viola’s tonal quality – on the C string it’s a bit like a cello but on the upper notes like the A string, it has the same tones as a violin, but without the squeaky bits!”

Natasha: “I heard my music teacher say that girls who played the viola were special,  so I thought ‘Great, I’d like to be a special player.’ I love the C string sound too.”

Alice: “Playing the viola in an orchestra means you get the great parts instead of being just one of a large number of violinists!”

We were then treated to viola performances from Abigail and Alice.

We are looking forward to seeing these endangered instruments becoming full-blown (!) members of our orchestras and ensembles over the coming year!